We use cookies to help you get the most from our site. If you continue without changing your settings, we’ll assume that you’re happy to receive all cookies on our site. However, you can change your cookie settings at any time.

Click here for our Covid-19 Travel FAQ's and Holiday Promise. For all up coming holiday information you can visit out Holidays page.

Cross-country or Nordic skiing is the oldest form of skiing and is generally practised over flatter ground or rolling terrain, in either the classic or skating style.

Cross-country skiing is something that anyone can take up and can be a fantastic way to see the area surrounding a resort or even away from ski centres with enough snow cover. Cross-country trails can take you far away from the hustle and bustle of the main ski pistes and lift lines, giving you a different perspective on the mountains. It's also fantastic for your fitness, and at the competitive level is one of the most cardiovascular-intense sports in the world. Several British athletes, most of whom developed their skills in Scotland, represent GB at World Cup level and in the Winter Olympics. It is a relatively easy sport to learn and the basic equipment is cheap, though descending takes a certain amount of skill and top end equipment can rival alpine ski kit in price.

Cross-country skis differ from alpine skis in that they're lightweight, very thin and designed specifically for self-propelled travel over a wide variety of terrain, not just downhills. Even if you've skied before, it is very different to regular skiing and the skinny skis can take some getting used to. The boots used are also lightweight and attach to the skis at the toes only, with the bindings enabling your heels to lift off the ski, allowing a striding motion. Waxless cross-country skis are far easier to use and preferred by many over their waxed equivalents. They achieve grip by means of a scaled texture set into the ‘kick zone’ (the area of the ski base under your toes), allowing you to propel yourself forward. Waxable skis require different types of wax for different snow conditions.

There are a number of Cross Country boot and binding types, for more details on these head here - Types of Ski Boot.

If you're trying cross-country skiing for the first time it's a good idea to investigate the difficulty of your chosen route before you set out. Because the skis are thin and often without metal edges, and the boots light and flexible, even a gentle downhill gradient can be a lot more difficult than it would be with downhill equipment! Stick to the already established cross-country tracks, where two parallel grooves in the snow are set to make controlled descents easier. Many areas will have trails rated according to difficulty.

There are also wider 'touring' cross country skis which are designed to be used in deeper snow where there are no trails, these often have metal edges to help with turning and control on descents.

There are two main techniques in cross-country skiing; classic, and skate (free) skiing. The classic style is where skiers stick to the parallel tracks cut into the snow, moving forward with a striding motion and use of poles. Cross-country skis have a camber which means the textured ‘kick-zone’ underfoot is not in contact with the snow when weight is evenly distributed between both skis for gliding. On downhill sections, a snowplough can be used to control speed.

Skate skiing involves movement similar to ice-skating, transferring weight from one ski to another, with skis moving outwards in a diagonal direction to propel you forward. To skate effectively, you need a specifically designed skate ski, or a ‘combi’ ski which allows both classic and skate skiing.

One of the standout resorts is Seefeld in Austria's Tirol region, which hosted cross-country events for the 1964 and 1976 Winter Olympics as well as the 2012 Youth Winter Olympics.

Another resort which excels in its cross-country offering is Lillehammer, Norway, where the 1994 Winter Olympics took place. Lillehammer isn’t your average downhill ski resort. It’s great for families and beginners, with plenty of activities for non-skiers to try out, including the Olympic Bobsleigh and luge track, dog-sledding, tobogganing and many others. Norway is also the birthplace of cross-country skiing and the sport is hugely popular there.

The trails around swanky St Moritz in Switzerland are also worth considering. There are 180km of trails in the Upper Engadin valley, groomed to perfection and with a spectacular setting amongst the peaks of the Graubünden region.

You don't have to plan a winter holiday around cross-country skiing though, as there's something available in or close to nearly every major resort. Check out our resort guides for more information. 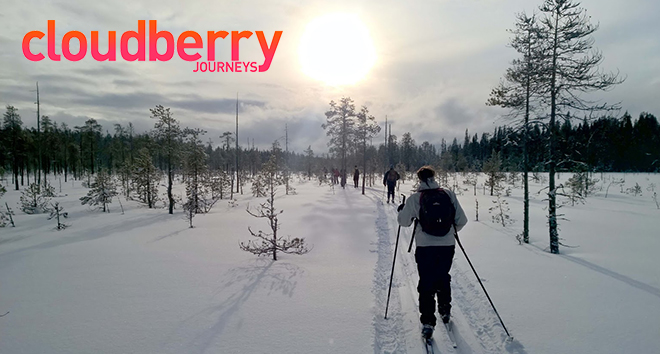 The Nordic countries are the true home of cross-country skiing. With vast unpopulated wilderness, full of forests and undulating fells, they offer the perfect terrain for cross-county skiers of all levels. Cloudberry Journeys have put together a series of different holidays - from learning to cross-country ski to Arctic adventures. Aside from our ready-made excursions we can also offer tailor-made packages for both individuals and groups. Take in the stunning scenery surrounding you, venture off the beaten track, and do a bit of wildlife and aurora spotting. It’s not only the physical side of cross country skiing that’s good for you too, the stress free nature of this wonderful way of crossing the snow allows you switch off and reset the mind as well.

OTHER ACTIVITIES IN RESORT

Discover plenty of other activities to keep you busy and entertained in ski resorts.

Do you want to challenge yourself on the slopes? Then 'free the heel, free the mind' and give telemarking a go!

WHAT TO WEAR ON THE SKI SLOPES

Shells, down jackets, ski pants, salopettes, gloves or mittens? How many layers? Questions, questions - but we can help you find the answers.